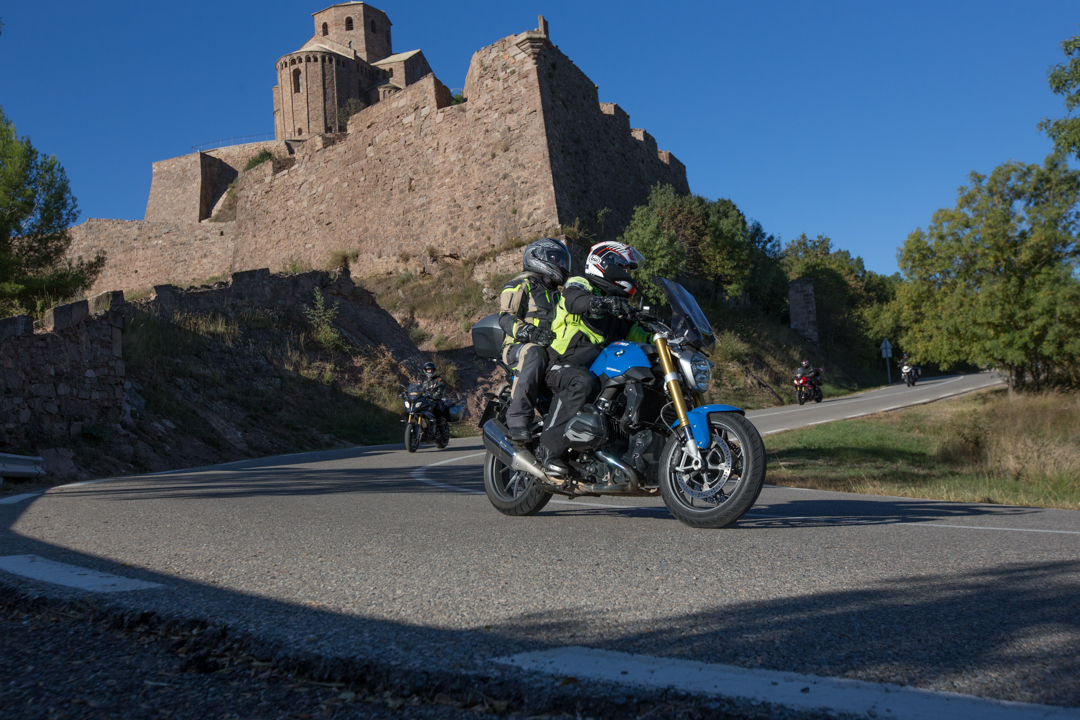 Did you see that?

This is the most common question posed between a motorcycle passenger to the rider.  This is due to the fact that while the rider is focused on the road and the upcoming turn or traffic sign, the passenger is looking everywhere else.  Being a passenger, a really good passenger is something most riders don’t think about.  Keeping your body loose and flexible to bend with the turns, brake and sudden accelerations is key, but the real joys of being a passenger come with the views.  Let’s face it, in cars and busses, your view is obstructed by bars and plastic, roofs and sides paneling.  On a bike, your views are limited only by your ability to turn your head so many degrees to the right, left, up, and down.  Really, for a good passenger, nothing is off limits, even watching behind you.  Some people may argue that a helmet impedes your vision, my answer is that they are not wearing the right helmet.  With a proper helmet ( I wear my Arai with pride), your central and peripheral vision is vastly superior than in a car, because the helmet is on your head, not in front of you.   This opens up a world of possibilities.  While the driver is focused on the road, and they damn well better be, you get to look at the entire rest of the world.  The world is on parade just for you, with trees, mountains, waterfalls, wildlife, ancient villages and people doing things you’d never see at home.  The vistas on the Spanish Pyrenees are truly spectacular.  Sky spearing peaks with dramatic skylines, insane curvy roads built into the sides of mountains traverse the Pyrenees. What was once a goat path 500 years ago has been widened and paved to allow one medium seized vehicle to navigate these majestic peaks.  Some of these views come with harrowing drop offs…and no railings.  Memorable moments come from being able to notice the little things, like the yellow ribbons on all the trees of a Catalan town, the central square statues made of farm equipment,  the hawk flying following above you as you traverse the down a mountain pass,. My favorite is the sheep wearing knitted hats.  I’m not joking folks.  While the riders were working on avoiding the flock of sheep, I was waving at the herders, watching the dogs do a magnificent job of rounding up stragglers, and several sheep were sporting colorful knitted hats with long dangling tassels.  Those are images only a passenger will ever have. 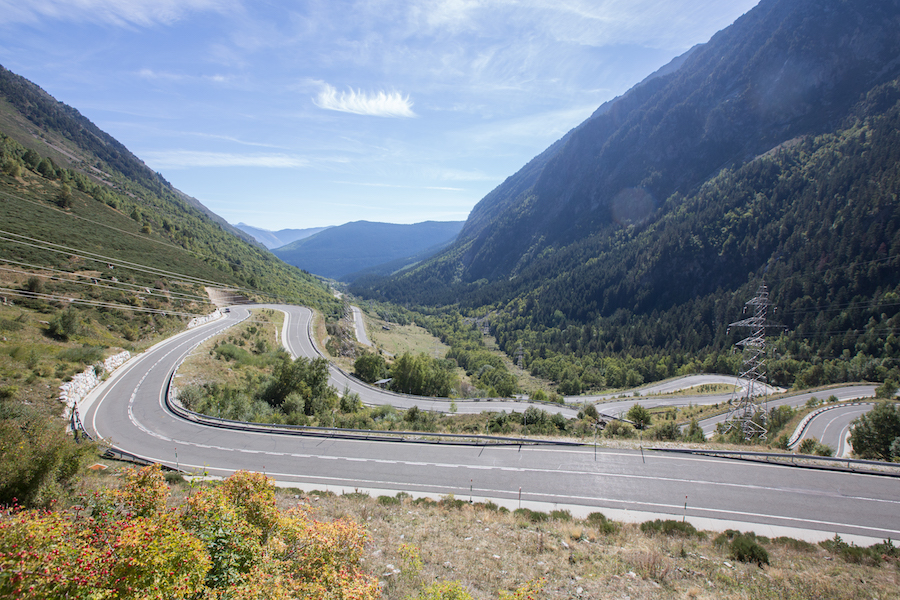 (A rider is always looking forward to the next turn, a passenger can also see where they've been)

Did you hear that band playing?

It’s not only the riding, scenery, and views, but also the people, architecture, tapas, Paradores, and history of the country.  If you are serious about being a great passenger, pick up a guide book for where you plan on going. Your rider is interested in the route, you’re interested in the country the route goes through. Learn about the history of the region. This will not only make you a better traveler, but a better companion to whomever you are traveling with.  This can be your moment contribute and shine. to not only your riders vacation but the entire group as well.  Knowing a bit about the country’s history will give you a greater understanding of the people, architecture, art, and even food.  Nowhere is this more evident than in Spain.  Knowing the history of the long battles between Christianity and Islam, will show you why Moorish palaces that became Christian Castles have so much Mudejar architecture (often done by Jewish artisans). Even the role that pork plays in the Spanish diet is linked to this conflict.  While in the foothills of the Pyrenees, we stopped for espresso in the medieval town of Ainsa.  Walking through the courtyard of the 11th century castle and into the plaza of the 16th century town and having café con leche outside on the cobbled plaza has a unique charm.  Going in one of the houses on the main square, we were treated to a cellar for the kitchen, main sitting rooms on the ground floor, and 2 dining rooms in the upstairs.  One with a royal red, plush velvet dignitary style, the other in a rich green, huntsman motif.  Another lunch stop in the Pyrenees was on the French side of the border will be forever etched in my mind.  Traveling at anytime of the year in Spain can be special, but we were doing the Pyrenees in late September, early October.   This turns out to be the time, when the herders are bringing their sheep, cows, and horses from the high mountain pastures to the lower ones for winter.  We happened to arrive in the small town during their Foire aux Cotelettes festival.  We heard some amazing local band playing, rides and games set-up in a carnival atmosphere for the kids, and a huge tent with tables set-up for the adults to sit, eat and talk, while 17 men out front grilled the lamb that was being served with local beer.  Standing out front, listening and watching the local band play regional folk music, while the mouth watering smell of roasted lamb wafted by on the breeze.  There are no words to describe an experience like that, and being immersed in it was truly special. These are just some of the treasures a passenger can find when traveling. 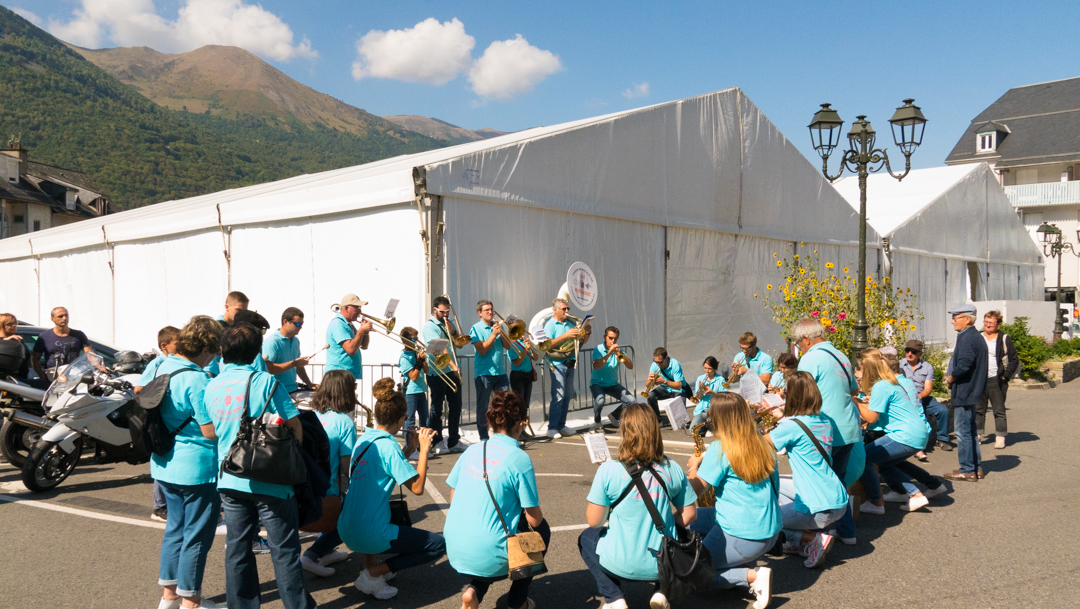 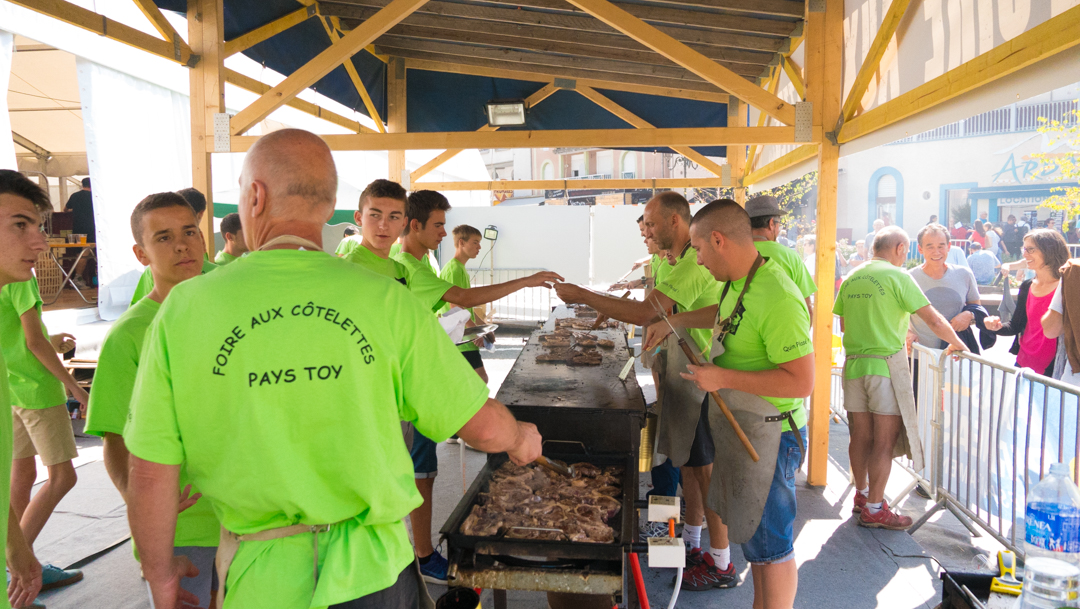 (There's always a festival of some sort happening, join it. This one's all about lamb)

Let’s face it, just having a bed and shower are all the requirements most guys need after riding all day.  For passengers, we often have different requirements.  We will notice the softness of the bed,  the number of pillows, the set-up of the room and amenities that come with your stay.  Leod stays in 3 & 4 star accommodations.  In Spain, these standards can vary widely so we’re thankful the guides research these places quite a bit.  Spain is a large country with a huge number of palaces, monasteries, castles and convents that are historically important but expensive to maintain.  Enter the beauty of the Parador.  A state run historical site that has been modified to be a hotel.  Complete with tapestries, mosaics, wine cellars, and turrets, these historical building are kept preserved by visitors dollars and have a strict amenities standards.  You will always have soap, shampoos, lotion, TV, hairdryer and WiFi (although due to the thickness of some castle walls , Wii is more of a hope than a certainty).  Many have historical artifacts in sitting rooms, and hallways.The old wells dot the courtyards. Plaques describing the great moments of history that happened there hang on the wall.  Where else can you say you stayed in a castle? 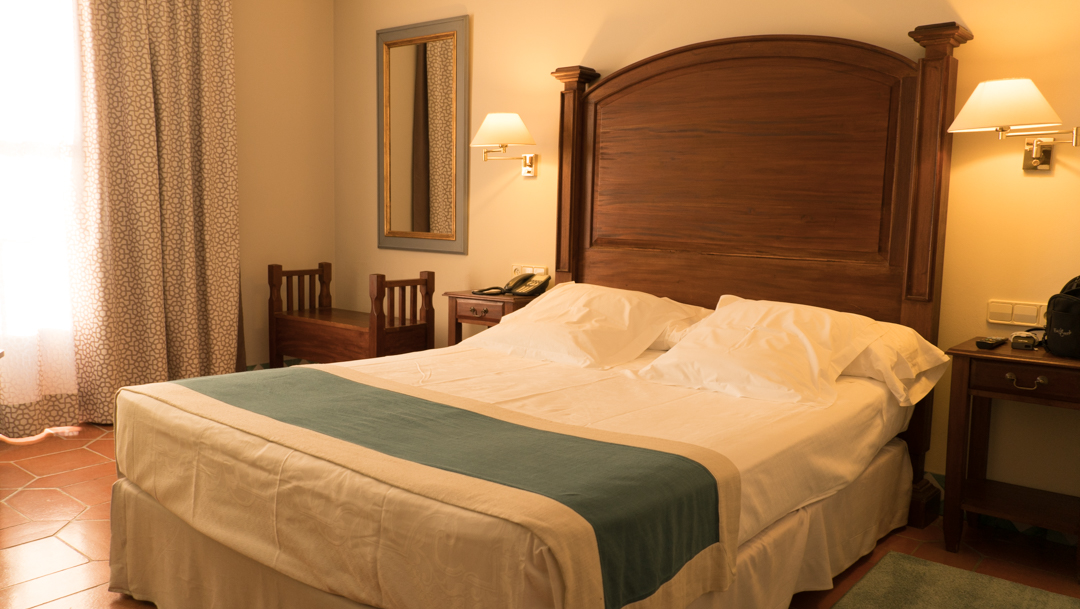 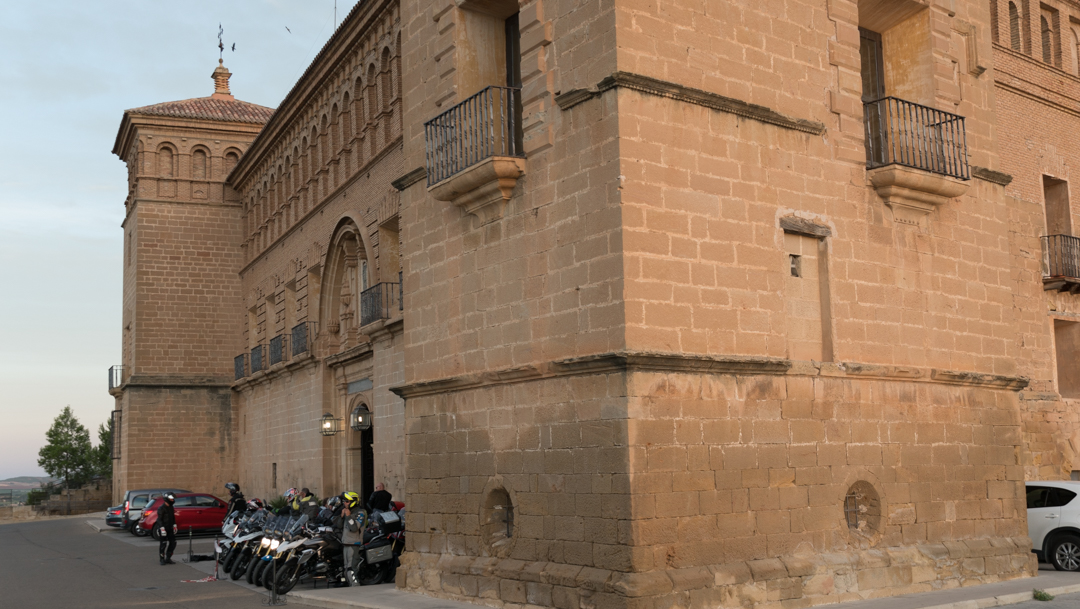 (Palaces, Castles, the hotels on the Spain tour are something different)

Eat where the toothpicks are.

Spain is known for its Iberico Ham.   This is a specially cured ham, a descendant of wild boar fed on acorns and prized for its exquisite taste.  Everywhere in Spain you will see the ubiquitous  cured pig leg on the special stand sitting on a bar or table.  Tapas roughly means “small plates”  and that’s exactly what they are.  This is a beautiful idea.  Instead of a large dinner in one place, the typical Spaniard goes bar hopping with friends and family eating a few small plates and sipping tintos (dark red, young wine) at several favorite places.  This is a time for socializing and having a great evening with small bites.  The beauty of this concept is that you can try many different dishes.  Order more of what you like and quickly (an inexpensively) find plates that are not to your liking.  For true connoisseurs of flavor, the ultimate tapas places are Basque.  Pintxos, are small plates with a toothpick sticking out of the dish.  All Pintxos are based on the simple principle of quality food of 1 item, special sauce on a piece of bread.  With this simple concept it is crazy insane how many different varieties of Pintxos you will see at one spread in a Basque Tapas restaurant.  This is bar food, so you will always see a large display on the bar, you pick up the food you want, and at the end, count up your toothpicks and pay.  The savvy diner knows that some pintxos are better heated, and many places have specialty Pintxos that are on a menu and prepared in the kitchen, as well as the large spread on the bar.  You will eat well and eat the most amazing dishes you have had on any tour.  Anyone in the mood for seared scallop with chili aioli on a toasted baguette? 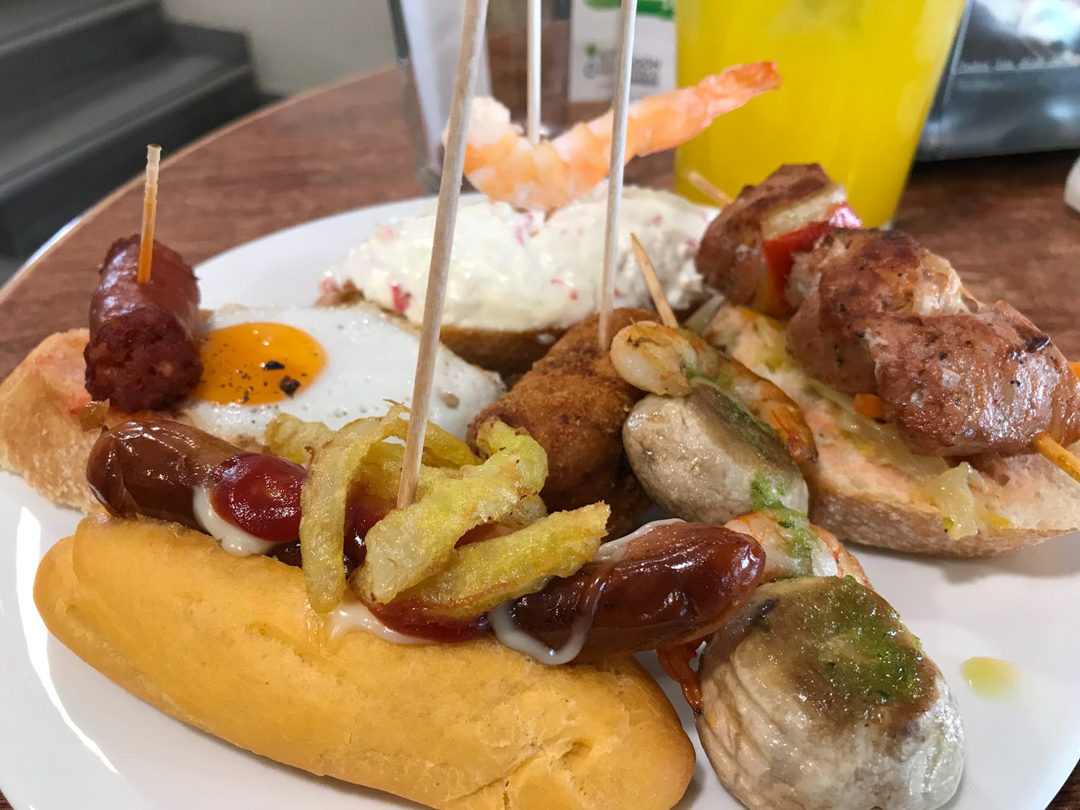 (You won't starve in Spain)

Barcelona, The town of Antoni Gaudi

When traveling on a motorcycle or any tour, your arrival and departure city are often the same.  If you’re going to have a true vacation and adventure, start it out right. and arrive a few days early.  There are a number of reason why this is a great idea.  You have traveled all this way, take some time to truly enjoy it.  This is a great time to walk off the jet-lag and acclimate yourself to the local time.  Most bike rental places will not rent to someone who just got off an international flight.  You need time for your mind and body to adjust.  Part of that adjustment will be just observing the city, people and flow of traffic around you.   Take a free or guided walk around the historical part of the city. It is an easy way to spend an afternoon. When you are finally on the road, all those signs won’t be so confusing, because you have seen them before and now know what they mean.  Barcelona is a lively port city with a colorful history and many things to see.  This is home to Moderisme architecture. A style championed by Antoni Gaudi (1852-1926).  This creative architect used the flowing lines of nature with stone, stained glass, woodwork and ironworks to create stunning buildings, parks, and private homes.  Several of his architectural creations have become UNESCO World Heritage sites.  Take the time, and book ahead to visit Batllo House, Casa Mila, Park Guell, and the church of Sagrada Familia which is still under construction and slated to be finished around 2026, at which time it will be the tallest church building in the world. 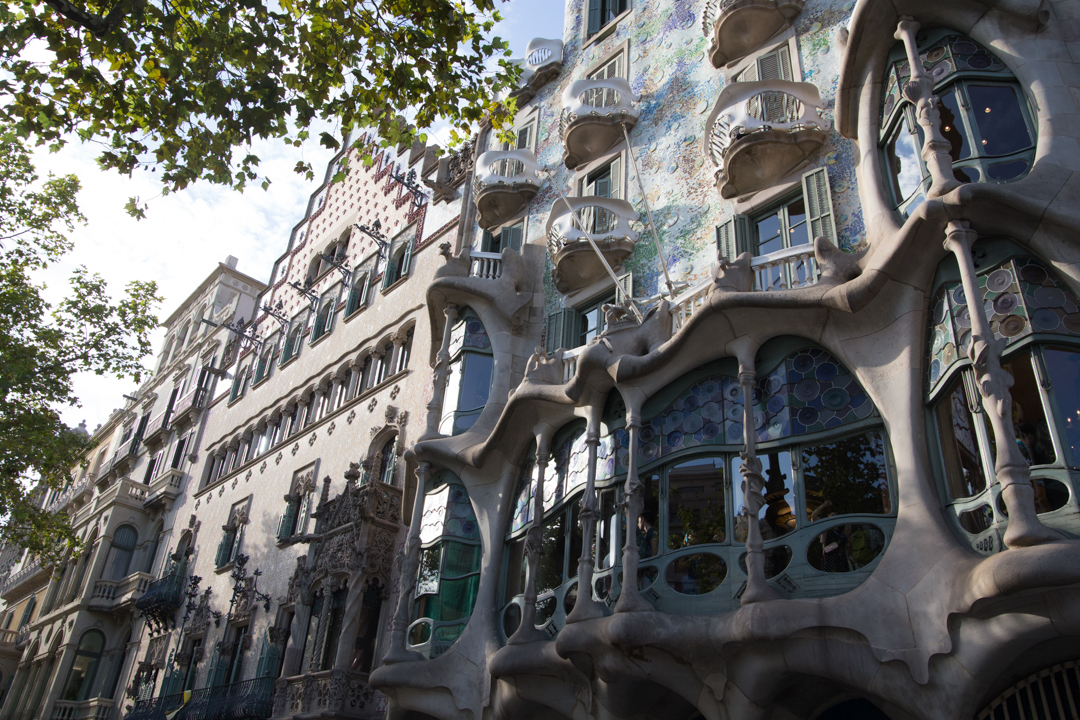 (You could only be in Barcelona) 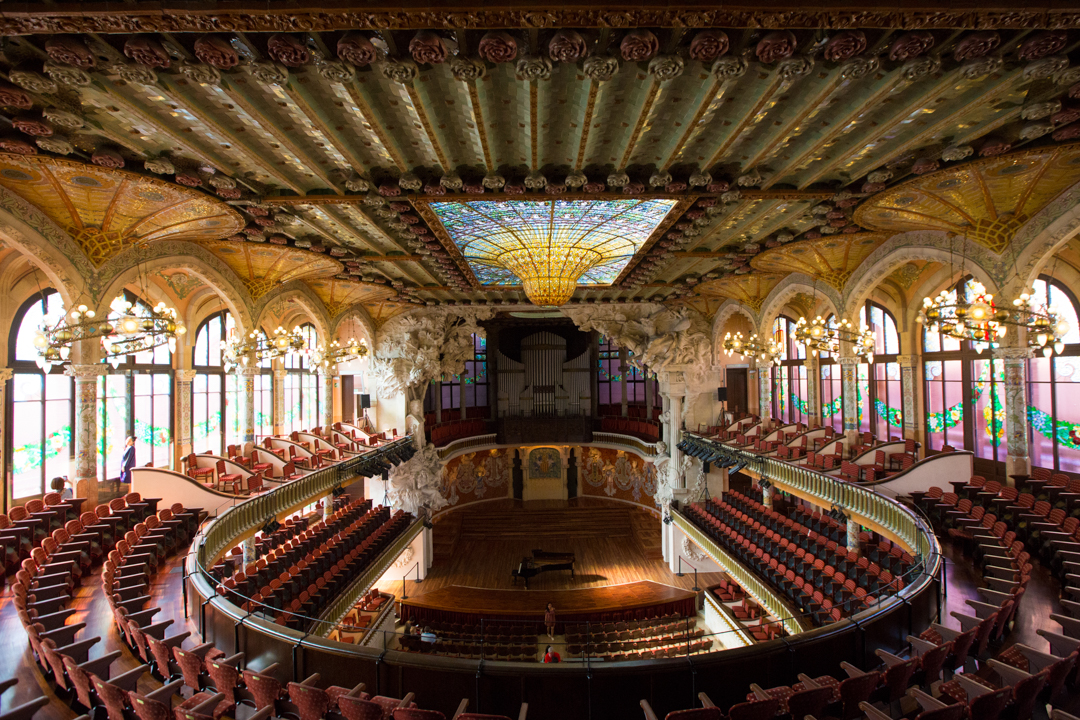 (The Palau de la Música Catalana, one of the jewels of Barcelona with nightly concerts)

When it comes to motorcycle touring,  the passenger has the best seat in the house.  You are immersed in the entire experience, without the responsibility of the piloting.  The feel of the road and the bike beneath you.  The crisp fog in the misty mornings in the mountains, the lazy sun in the afternoons.  You take in the smells of the towns as they are having a market day full of vegetables and the savory smell of roasted lamb at the festival. The sounds of the bells on the cattle as they graze on high pastures.  The sights of the dense woodlands, rolling hills, high desert plateaus, and majestic peaks of the Pyrenees are all yours to enjoy.  All your senses are engaged.  The memorable moments of your tour will be forever intertwined with your senses and feelings in those moments.  Those are things that can never be captured on any camera or video.  These are the joys and memories of a motorcycling passenger in Spain. 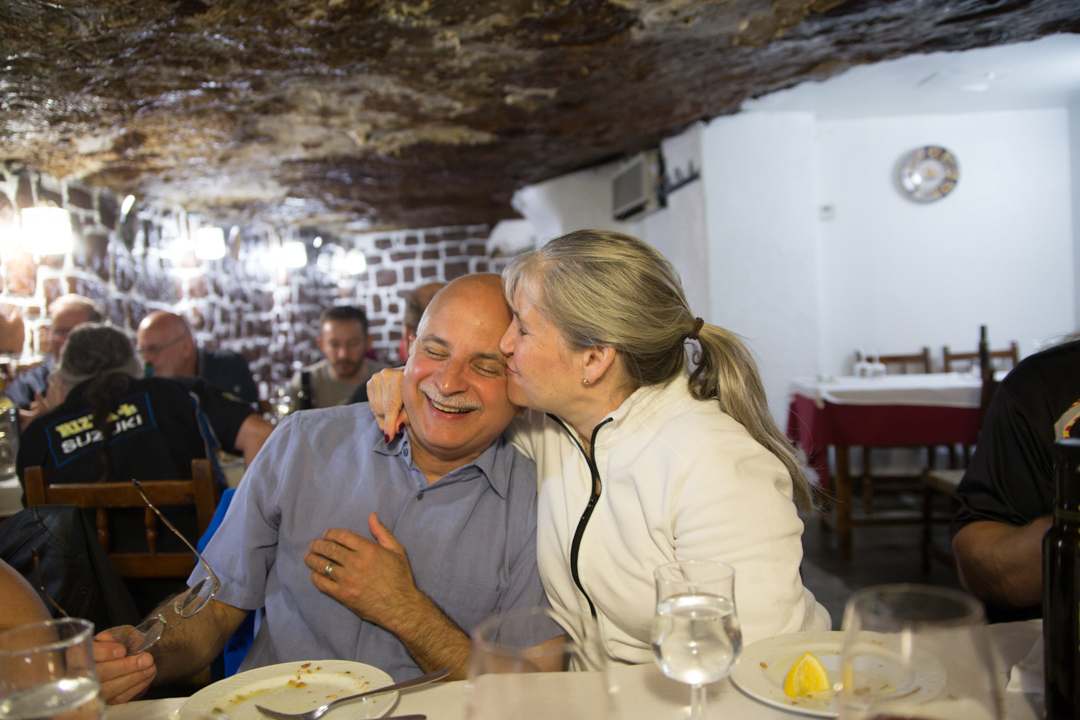 (Take me for a ride) 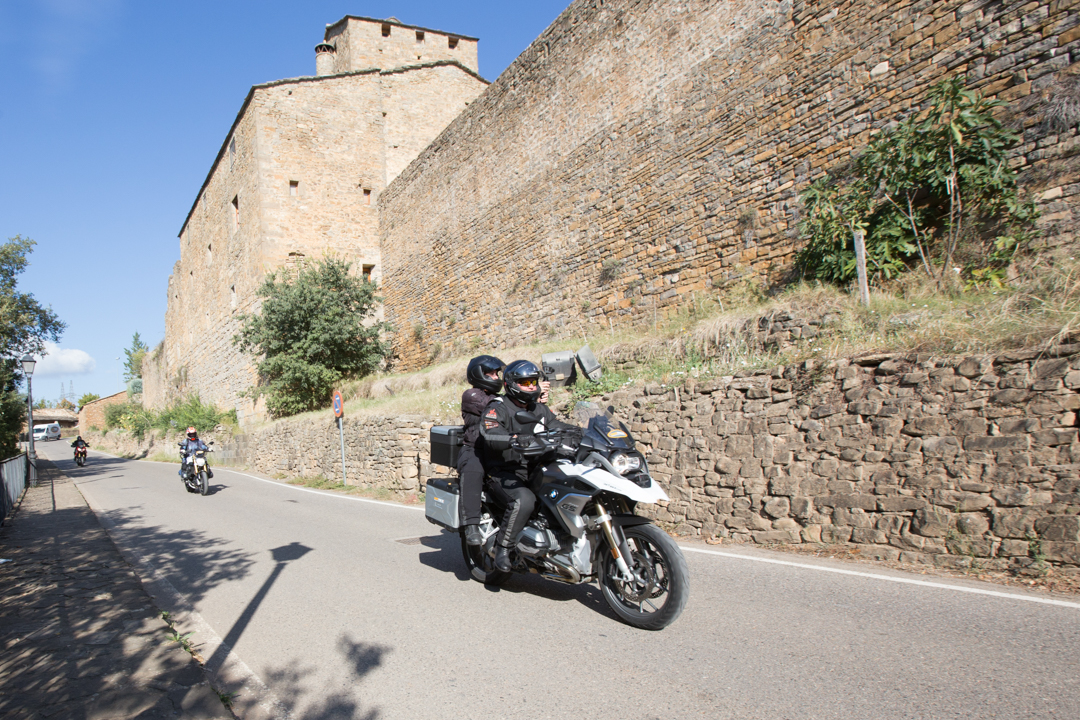 (By far the best way to experience Spain)